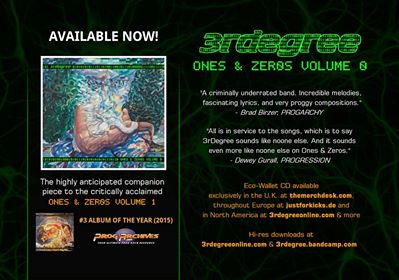 New album is companion piece to 2015’s ONES & ZEROS: VOLUME 1
Independent American progressive rock band 3RDegree will release the follow-up to Ones & Zeros: Volume 1 on April 30, 2018. Envisioned as a prequel (that’s still a thing right?), it is aptly titled Ones & Zeros: Volume 0. Where Volume 1 imagined a world transformed by a Technological Singularity, Volume 0 supplies the backstory nearer to present-day.

Instead of a landscape dominated by a ubiquitous corporation, the world is seen through the eyes of cybernetic
companions, ambi]ous transhumanist parents, lonely internet trolls, social-media addicts trying to expand their personal brand and elites buying acres in New Zealand to ride out the apocalypse. And in true 3RDegree fashion, this is all delivered with a healthy dose of dark humor using melodic, song-based progressive rock as the vehicle.

3RDegree are coming off a high following 2015’s Ones & Zeros: vol. 1-the final release from 10T Records.
The collection garnered the best reviews of their career including a third-place finish on Progarchives.com’s year-end list just behind Anekdoten and Steven Wilson. It also set them on a tour that included five European countries and several US states, highlighted by performances at the Summer’s End Festival (UK) and 2016’s RoSfest in Gegysburg, Pennsylvania. Their most recent appearance at the budding ProgStock Festival (NJ), featured a stage show replete with ornate video
backdrop and a Ted Talk-ish narrator purpor]ng to be from the fictious Valhalla Biotech Corporation which features large in Ones & Zeros.

The CD will be available via PayPal directly from the band at www.3RDegreeONLINE.com, at the band’s
Bandcamp page 3RDegree.bandcamp.com as well as from many prog rock retailers worldwide such as

Just For Kicks (Germany), Syn-Phonic (US), KinesisCD (US) and others. Download will be available on
iTunes, Amazon and most others although 24bit/44.1khz version will be exclusive to Bandcamp and the
band’s website.

The “Ones & Zeros Show” Tour 2018 (previewed here in the video below) comes to the following cities and
venues on these dates:
May 11 The Delancey New York, NY
May 12 Private Event Bal]more area (email band for invita]on)
May 13 Roxy & Dukes Roadhouse (NJ Proghouse presents) Dunellen, NJ
May 15 Reggie’s Chicago, IL
May 16 Wilbert’s Cleveland, OH
May 18 The Port Theater Cornwall, ON Canada
May 19 Starlite Southbridge, MA
May 20 The Hatbox Theater Concord, NH
Please note that a special “meet & greet” with members of the band will take place in the merch rooms
at RoSfest at the Majestic Theater in Gettysburg, Pennsylvania all day Saturday, May 5th.