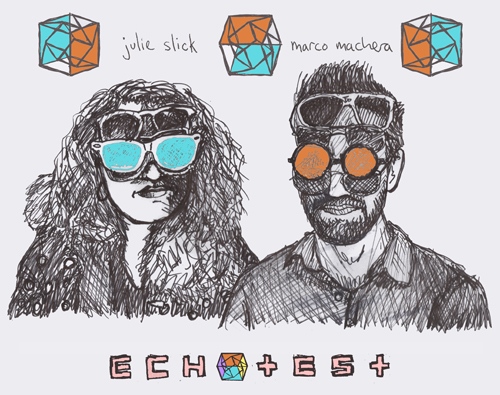 Having met through the Three of a Perfect Pair Music Camp in 2011, bassists Julie Slick (Adrian Belew Power Trio) and Marco Machera started collaborating in April 2014 to play a short run of shows in Tuscany, after Julie’s European tour with The Crimson ProjeKCt. Very spontaneously, new songs were written during a few days of rehearsals. The impromptu bass duets ended up being so satisfying and well-received that Julie and Marco eventually decided to write and record more material together, eventually giving the project a name: EchoTest. The group’s live shows and albums feature many fascinating and legendary local and international artists (Pat Mastelotto, Tim Motzer, Zach LoPresti, Ali Wadsworth, Ian Gray, and Greg Rosen).

The sound they create is not quite what one would expect from a couple of traditionally low end instruments; it’s a reinvention of the role of solo electric bass and brilliantly displays the songwriting abilities of the duo… a captivating combination of loop music, ambient soundscapes and interlocking bass patterns, always melodic yet aggressive and edgy at times.

According to Guitar Player Magazine, Jane Getter is
” the fieriest fretboarding female ever to strap on a Stratocaster.
She has played with many jazz and rock greats while garnering increasing recognition as a bandleader, gifted writer and instrumentalist.”

She has performed and recorded with many music icons, including legendary jazz/blues organist Brother Jack McDuff, Return To Forever drummer Lenny White, vocalist Ursala Dudziak, as well as Jaimoe (of the Allman Brothers), Michal Urbaniak, Kenny Garrett, Regina Carter, Headhunters drummer Mike Clark, The Roots The Jam and many others. She also played in The Saturday Night Live Band.

Jane Getters fourth album ON was released Oct 2, 2015 on Madfish Music, a division of Snapper Music and was submitted for a Grammy nomination 2016. Previous albums include three (2012) on Alternity Records, which was also submitted for a Grammy nomination in 2013. Her second release See Jane Run, (2005) on Alternity Records and her first album Jane (1999) was released on Lipstick Records.

We will be playing the exciting and hard hitting music from our newly released album ON, on Madfish Music, along with a few older hits from three and See Jane Run. Get ready for some intense jams!