Due to a scheduling conflict with Project RnL, they will be unable to perform at the NJProghouse Homecoming Weekend 2014.
The NJP home offices have decided to use our secret time travel machine to bring one of our acts planned for 2015 to the 2014 Homecoming Weekend Stage. 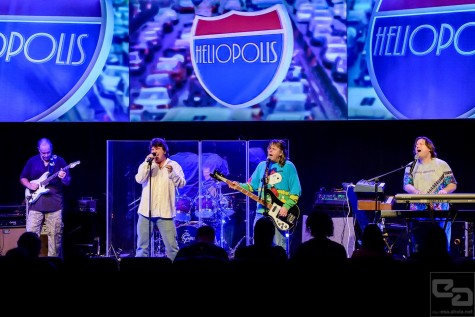 Conceived in autumn 2012, Los Angeles based Heliopolis (Greek for “City of the Sun”) set out from the start with one primary goal in mind: celebrating the uplifting power of music.

“These days there seems to be a disproportionate emphasis on darkness,” says bassist Kerry Chicoine; “We find exploring the balance between despair and optimism a more challenging and creatively satisfying approach.”

“At the end of the day, we believe in the greater good,” says lead vocalist Scott Jones, “and our focus is creating musical landscapes reflective of our shared outlook.”

In 2013, the band wasted no time writing and recording their debut album “City of the Sun” while simultaneously undertaking a string of well-received performances on the West Coast (Berkeley, Los Angeles, San Mateo and Santa Monica, California as well as Mexicali, Mexico); in so doing, the band proved their viability and commitment to excellence onstage, wowing audiences with their intensity and enthusiasm.

“City of the Sun” (scheduled for release in August, 2014) confidently delivers a cohesive and imaginative musical statement recalling classic albums from the golden era of progressive rock while remaining firmly grounded in the present.

“We enjoy mixing our influences, putting ideas in a blender and, hopefully, surprising ourselves with the results,” says keyboardist Matt Brown; “There are no limitations,” continues guitarist Mike Matier.

Heliopolis is honored to perform at the renowned NJ Proghouse’s 2014 Homecoming Weekend.

“The commitment NJ Proghouse has shown in supporting cutting edge artists is highly commendable,” says drummer Jerry Beller; “To perform alongside some of today’s most innovative and progressive artists is very humbling.”

The journey’s about to unfold…