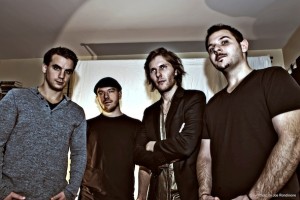 With the release of JOLLY‘s new album The Audio Guide To Happiness (Part 2) only a week away, the band has unveiled their first video for their premier single, “Dust Nation Bleak.”

The Audio Guide to Happiness (Part 2) has come to symbolize JOLLY’s triumph over Hurricane Sandy, the devastating storm that wreaked havoc on their studio and left Drummer/Producer Louis Abramson homeless just weeks before its completion. Luckily the album was saved from the disaster, completed in various friends living rooms, and is being released March 5th via InsideOut Music.

JOLLY’S new music video “Dust Nation Bleak” is filmed directly from the eye of the storm- recorded in the ruins of their studio, and home base. From the outside it may appear to be just another rock video in a gritty setting, but this location represents the sacred remains of JOLLY’s birthplace, and carries deep significance.  The band comments: “When God gives you lemons, make a music video.  JOLLY loves you.”

In March 2011, JOLLY released The Audio Guide To Happiness (Part 1), the first of a two-part series designed to bring listeners to a state of true happiness. To optimize the JOLLY listening experience, the band collaborated with a professor and graduate students at a nearby university, conducting studies on over 5,000 subjects to perfect the usage of binaural tones in their music.

Jolly will be coming to the NJProghouse on May 6,2013 along with Riverside. (read more)