Come support our brothers & sisters in New England as they present: 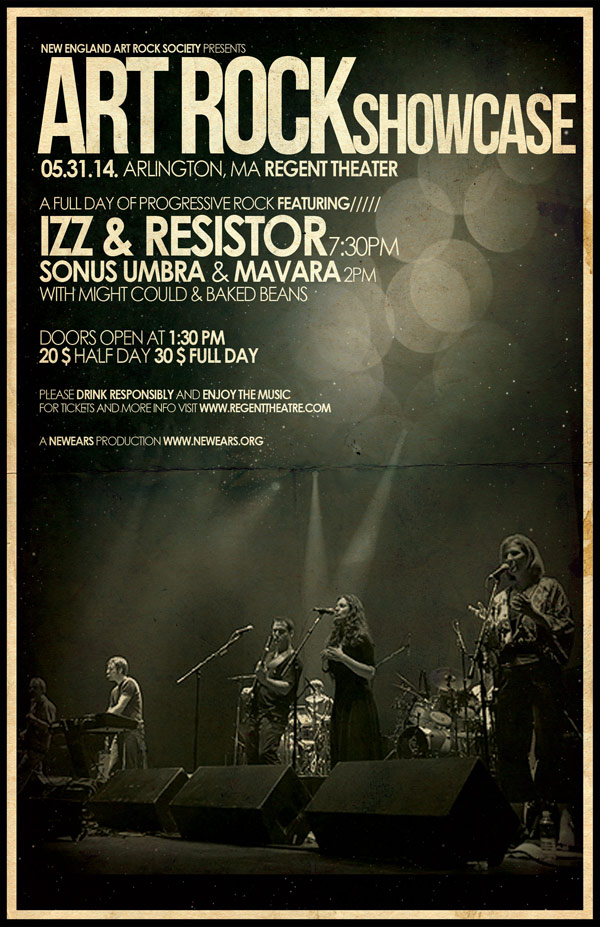 General Admission Tickets For The Entire Day (ADMISSION to BOTH SHOWS) are available at $30
*High School & College Students with I.D.: $10
*Present your School I.D. Card for pick-up at the ‘Will Call’ window

IZZ
Founded by Galgano brothers (Tom and John) IZZ has performed at numerous venues and festivals including: Rosfest 04, CalProg 04/05, Progday 02/06, NEARfest 07 and the Terra Incognita Progressive Rock Festival 2014 . IZZ released their sixth and most recent studio album, Crush of Night, to rave reviews from fans and critics alike.

RESISTOR
Resistor is the rock quartet of Steve Unruh, Fran Turner, Barry Farrands, and Rob Winslow. The band’s sound is characterized by merging modern progressive and rock song structures with an organic classic rock sound. Their classic rock sound is probably due to their preferred recording technique of having everyone play the basic tracks in the same room at the same time, like bands did in the “old days.” This allows RESISTOR’s recorded music to “breathe” as you can hear the band members adjust to each others’ energy, tempo, and feel in real-time.

MAVARA
Mavara, is Iran’s first premier progressive rock band. The name Mavara translates to “beyond everything you think” which speaks to the essence of their music. The band was formed in 2001 by composer/keyboardist Farhood Ghadiri and over the years has had a fluid line-up of members, performing extensively in Tehran and Karaj. Currently Mavara is comprised of Ghadiri along with Ashkan Hamedi/vocals, Sina Khodaiefer/bass, Anis Oveisi/keyboards, and Americans Scott Abene/lead guitar and Jim Welch/Drums. Because of their unique sound and talent, Mavara quickly gained notoriety in Iran, receiving acclaim from the Tehran Industry and Science University as “Best Rock Band” at a Live Performance. Additional honors include an invitatio to perform for the Internet Music Festival, Teheran Avenue in both 2003 and 2005. Their music is best described in terms of their influences, with a generous helping of Pink Floyd, Porcupine Tree and Marillion being the first bands that come to mind. In other words, more on the melodic side of Progressive Rock.

MIGHT COULD
Might Could consists of Andy Tillotson, Tim McCaskey, and Aaron Geller on acoustic guitar, and Luis (Gordo) Nasser on acoustic bass. They’ve been writing fun and engaging instrumental music featuring tightly interlocking guitar parts for over a decade. Originally based in Maryland, where the band went to school together, Might Could has mostly relocated to Chicago. Over the past few years, they’ve slowly worked on writing and recording “Relics From The Wasteland,” their first new album since 2007’s “Wood Knot.” The new album features more percussion (even some V-Drums!), a pair of covers, and their most collaborative songwriting to date. Their influences remain similar: rock, metal, classical, jazz (including gypsy jazz), and video game music. Might Could looks forward to promoting all three albums with shows near Chicago, out East, and beyond in 2014.

What is NewEARS? A not-for-profit organization of progressive music lovers. The primary goal of NewEARS is to create a community of music enthusiasts dedicated to sharing and promoting progressive rock in the New England area.