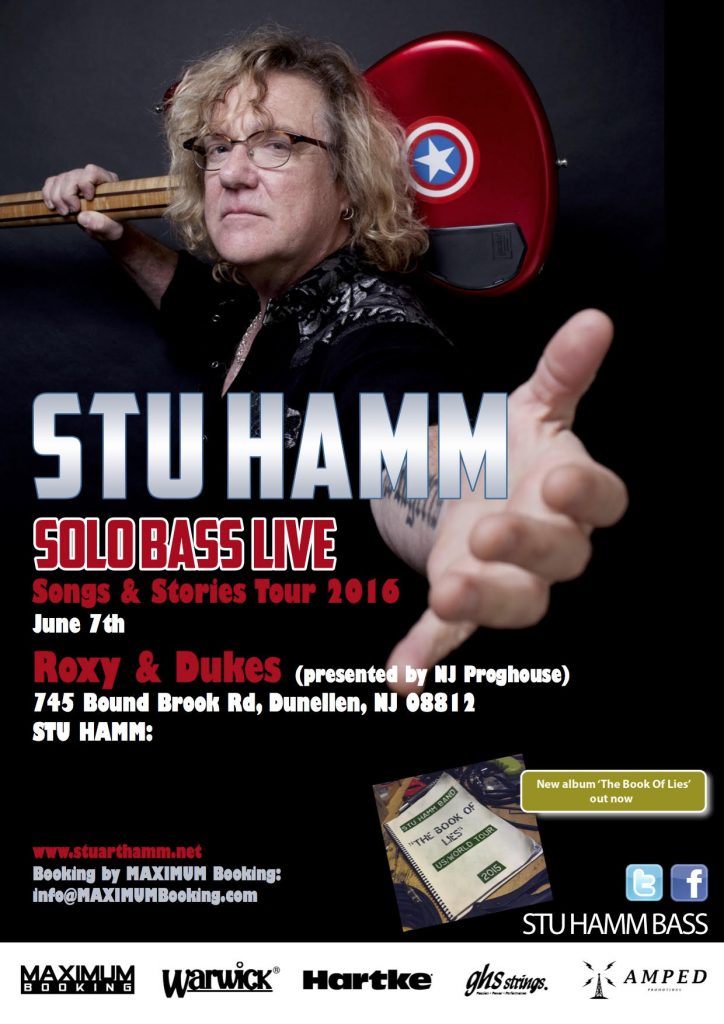 Having stunned audiences across the world with his innovative playing, Stu Hamm — the only bassist to win Guitar Player magazine’s readers award for both best rock bassist AND best jazz bassist in the same year! — has made a name as the go to bass player for the world’s great musicians. His time spent playing with Steve Vai and  Joe Satriani cemented his place among the greats and gave Stu the platform to display his pioneering bass techniques to adoring crowds worldwide.

Born in New Orleans, Hamm spent his childhood and youth in Champaign, Illinois, where he studied bass and piano, played in the stage band at Champaign Central High School, and was selected to the Illinois All-State Band. Hamm graduated from Hanover High in Hanover, New Hampshire in 1978 while living in Norwich, Vermont. Following high school, he attended the Berklee College of Music in Boston, where he met guitarist Steve Vai and, through him, met Joe Satriani. Hamm played bass on Vai’s debut solo album, Flex-Able, which was released in 1984. In 1990 Hamm was awarded the Distinguished Alumni Degree from his Alma Mater.

Hamm has performed and recorded with Steve Vai, Joe Satriani, Eric Johnson, Michael Shenker, Frank Gambale, and many other well-respected guitarists. It was playing  live on tour with Satriani that brought Hamm’s skills to national attention. Subsequent recordings with Satriani and other rock/fusion artists, along with the release of his own solo recordings (featuring a.o. keyboard player Tommy Mars, guitarists Alan Holdsworth and Robert Fripp, drummers Steve Smith and Tommy Lee), solidified his  reputation as a bassist and performer.

Hamm has travelled the world from Berklee to Belfast to Budapest to Bali to Berlin.  He’s performed in a 19th century circus tent with Joan Baez, and recorded a duet of “Do Right Woman” with her.  Hes performed with Mick Jagger, played sold out shows at Royal Albert Hall and in front of 120,000 people in Mexico City with a Mexican Rock Band…he’s also played cruise ships, weddings and put on a tux and played Christmas Songs at department stores and in between the airport transfers, hotel suite check-outs, backstage room dinners, and concert hall  performances, has collected countless stories and anecdotes from his travels across the globe.

Now promoting the release of his newest solo album ‘The Book Of Lies,’ Hamm takes to the road with new music, including his petite suite for solo bass, and a host of stories and anecdotes for musicians and non-musicians alike.  A gut rumbling mix of new and old hits mixed with Stu’s trademark humour and story-telling make for a unique show like no other.

Hamm, who has played some of the largest festivals in the world, showed he is very comfortable in an intimate club setting, as he easily bantered with the audience telling stories and cracking jokes between fits of musical wizardry. In an alternate world he would be excellent as a stand-up comedian or a talk show host or a teacher. He even gave some great advice to the audience, revealing his secret to keeping a long, storied career creatively moving forward: “Hire great musicians and get out of their way.”  – http://sfsonic.com/concerts/stu-hamm-band-brings-chaos-and-calm-to-yoshis/