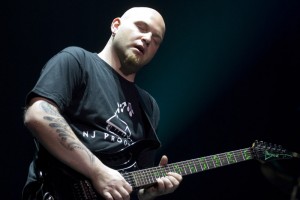 Today I got the news that my friend Piotr Grudzinski had left this world.

With each time I say this I feel a terrible emptying in my heart and tears well up. For those who do not know, Piotr was more than a member of a band I loved but a great friend of mine and of others in the Proghouse family.

When Piotr and the rest of Riverside landed at JFK my ugly mug, along with the mug of Ray Loboda, was the first to greet him and the boys on their first trip to America. I think that by the time we got onto the Belt Parkway we were friends for life.

Ray and I are fortunate for this to happen as we were asked by the guys of NEARFest to be the transport coordinators and so we went to get them. That was a great weekend. Music, nonsense, liquid refreshment, educating all the boys about Tony Danza and rusty trombones, with A bunch of us from NJP and a certain Englishman name Progzilla all crammed in a room, and what it all meant while laughing until we couldn’t breathe. Piotr and I watching as much World Cup as we could in between everything else we were doing that weekend. We were building a friendship that will last as long as Ray and I have brains that can recall the memories.

About a year later I was in the air with Ray and Keith Loboda as we headed to The Netherlands and Germany to hang with Piotr and all of Riverside for 6 great days and 2 great shows. When Ray and I walked in to the first show’s sound check with Rob Palmen we were moved by the way Piotr stopped playing, put down his guitar, and came over to us and gave us each a hug followed one by one by Mariusz, Michal and Piotr K. Family grew even larger with the entire crew and Sir Harold Jansen and Oliver Wenzel making our trip that much more special.

Riverside came back the next year for an exclusive show at NJ Proghouse and then we were off to Montreal for a long weekend of fun as they played FMPM. Ray, Noreen Loboda and I with the band and manager Rob Palmen and crew.

It was like there was no time between visits. Although saying goodbye always sucked.

Then we (Ray, Kevin and I) brought Riverside in for NEARfest in 2010. Twice more they came back and played at NJProghouse.

We have been very fortunate to have these men as friends and for bringing Piotr in to our lives.

The thing that sticks with me most from the latest visit this past September was how Piotr and I fell right back in the groove. Both In the green room at The Crossroads and at the show in Webster Hall a couple nights later. We sat and talked and sometimes said nothing at all. I will treasure these memories for all my time.
I know that all of us at NJP are feeling some kind of pain and sadness as I imagine many of you are. Remember Piotr Grudzinski in whatever way you can and be happy for that memory of when it came your way.

Keep his wife Monika, his family, Mariusz, Michal and Piotr K and all his other mates in hearts and minds.

I will miss you my brother. Much love.

Photo used by permission from Studio-M